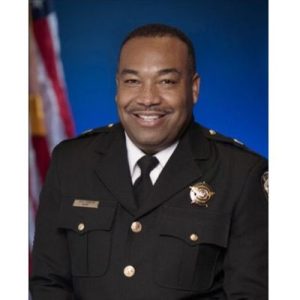 Major Keemeit Johnson is currently a Major at the Rockdale County Sheriff’s Office (RCSO). He served previously as the South Precinct Commander for Dekalb County Police Department for three years before assuming his current role. With over 28 years as a public servant, Major Johnson is a highly accomplished and experienced law enforcement executive. He was promoted to the rank of Major April 4, 2015.

Major Johnson began his career in October of 1991 with Dekalb County Police Department as a Patrol Officer. During his tenure, he was responsible for the daily precinct operations while managing approximately 128 police officers and civilian personnel. Prior to this appointment, Johnson’s 28-year career with the DeKalb County Police Department included assignments such as Assistant Precinct Commander, Assistant Special Investigations Unit Commander, and Detective Lieutenant of the Special Victims Unit. He began his career at the RCSO on August 24, 2020.

Major Johnson made significant strides to advance the DeKalb County Police Department. His vision which aligned with the principles of 21st Century Policing, focused fundamentally on the reduction of crime and community involvement. During his tenure, Johnson instituted several community initiatives that supported this vision. Under his leadership Major Johnson has accomplished a 31% reduction in violent crime between 2015 and 2017, and a 14% reduction in property crime during this same period. Two additional accomplishments include hosting the first ever Youth Violence Symposium in DeKalb County in 2018 and the creation of a Child Abduction Response Team (CART) Unit.

His educational accomplishments include completion of the Federal Bureau of Investigation Academy (FBINA) Training for Law Enforcement Executives, Cybercrime Investigation training, Sex Crimes training, Missing &amp; Exploited Children Chief Executive Officer training, Leadership for Missing and Abducted Children training, and a Bachelor of Science in Criminal Justice Administration from Columbia Southern University. Major Johnson has been a proud member of N.O.B.L.E. since 2014. He is a Board Member for the Dekalb Rape Crisis Center/Day League, a member of the Dekalb County Steering Committee for Re-entry, and a
member of the Dekalb Juvenile Court Youth Advisory Council.