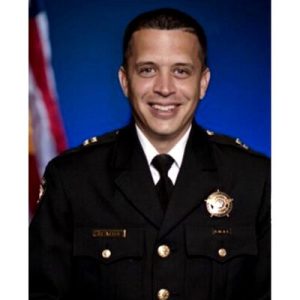 Captain Jason Welch is currently the Divisional Commander of the Judicial Services Division. He has been employed with the Rockdale County Sheriff’s Office for 18 years. He has worked as a Detention
Deputy, Patrol Deputy, and Investigator in the Criminal Investigations Division.

With over nine years of supervisory experience, Captain Welch has served as a Corporal and Sergeant of the undercover Narcotics/Vice Unit. He was appointed to the rank of Lieutenant and served as a Uniform Patrol Shift Commander, and a Special Investigations Commander.

Captain Welch also served as the Assistant Commander of the Uniform Patrol Division prior to being promoted to the rank of Captain and becoming a Divisional Commander. Captain Welch has commanded the following Divisions within the Rockdale County Sheriff’s Office: Jail Division, Uniform Patrol Division, and currently serves as the Commander of the Judicial Services Division and Rockdale County Sheriff’s Office SWAT Team.

In 2006 he graduated from the Clayton Regional Law Enforcement Academy to become a Georgia P.O.S.T. Certified Law Enforcement Officer. By 2015 Captain Jason Welch obtained a General Instructor /Firearms Instructor Certification from the Georgia Peace Officer Standards and Training Council and completed the Professional Management Program at Columbus State University in 2016.