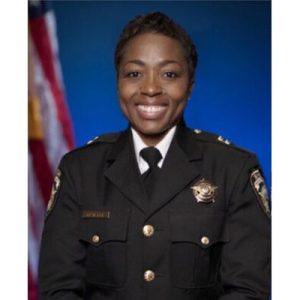 Captain Harris began her law enforcement career in 1998 when she joined the RCSO as a Detention Deputy. She successfully completed her Basic Peace Officer Certification at the Fulton County Public Safety Training Center in 2001. She transferred to the Rockdale County Court Services Division in 2003 and worked as Superior Court bailiff until 2005 when she left her law enforcement career and relocated to Nashville Tennessee with her family. In 2007 when Captain Harris returned to the Rockdale County community, she resumed her career with the RCSO and was assigned to the Jail Division. Within six months of her return, she received a lateral promotion to Jail Administration as the Bond Administrator and GA Crime Information Center Terminal Agency Coordinator.

While embracing these new responsibilities she was promoted to Corporal in 2013 and Sergeant in 2017 by Sheriff Eric J. Levett. In April 2018, she was transferred to the Office of Professional Standards. This
division is responsible for Recruitment, Background Investigations, Hiring, Citizen Complaints, Use of Force Investigations as well as Internal Affairs Investigations. She was also the Public Information Officer where she conducted interviews with the media, reporting events and occurrences for transparent communication with the public. In December 2018, she was promoted to the rank of Lieutenant and transferred to the Jail Division as Shift Commander. This role involved managing day to day jail operations with more than twenty subordinates and an inmate population of over 400. Captain Harris embraced this responsibility and received another promotion as Jail Administrative Lieutenant in February 2020.

Captain Harris has earned certifications for Jail Officer, Intermediate Peace Officer, Managerial, Supervisory, and General Instructor through the Georgia Peace Officer Standards and Training Council (GA P.O.S.T.). Other certifications include Professional Management Program through Columbus State University where she also majored in Criminal Justice and earned her Bachelor of Science degree. Captain Harris is passionate about all people, law enforcement, and the vision and mission of the RCSO. During her tenure, Captain Harris has enjoyed spending quality time at numerous community events and has served as a member of the Rockdale County Mentoring Program.