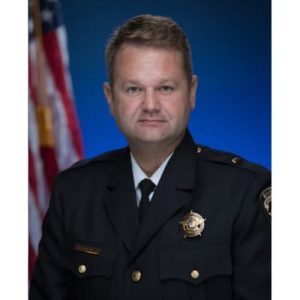 Captain Hooks knew he wanted to be in law enforcement at an early age. Following his high school graduation at Heritage High School in Rockdale County, he enrolled in the criminal justice bachelor’s program at Valdosta State University. His official law enforcement career began with the Rockdale County Sheriff’s Office on February 16, 2004, as a Detention Deputy. In March 2006, he became a certified officer and was assigned to the Uniform Patrol Division as a patrol deputy.

In 2007, Captain Hooks completed the Columbus State University Professional Management Program and received a certificate in criminal justice. With the knowledge gained, he was able to apply his skills and was named Deputy of the year for the Uniform Patrol Division in 2008. During his time in Uniform Patrol Division, Captain Hooks was a member of the Rockdale County Sheriff’s Office S.W.A.T. Team, the R.C.S.O. Dive Team, and the crime suppression unit, and became a traffic accident reconstructionist. In October 2010, Captain Hooks was promoted to Investigator and was assigned to the Criminal Investigations Division. In August 2011, he was assigned to Task Force Group II with the Drug Enforcement Administration. As a member of Task Force Group II, Captain Hooks investigated domestic and international drug trafficking organizations.

During his time with DEA, he graduated from DEA Atlanta’s Leadership Development Program which was a program dedicated to enhancing the leadership skills of members within the Atlanta Field Division. In 2012, Captain Hooks received his bachelor’s degree in business management from the University of Phoenix. This led to his promotion to Corporal in February 2015 and was reassigned to general criminal investigations where he supervised eleven Investigators within the Division. In September 2016, he was promoted to Sergeant and took command of the Narcotics and Vice Unit. In December 2018, Captain Hooks was promoted to Lieutenant within the Criminal Investigation Division and oversaw the day-to-day operations of the entire division. In May 2020, Captain Hooks received the Excellence in the Pursuit of Justice Award from the United States Attorney’s Office for his contributions to the mission of the U.S. Department of Justice.