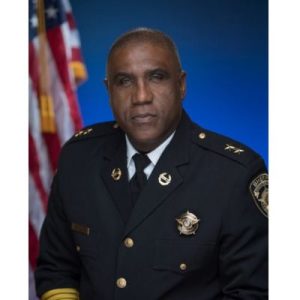 Chief Deputy Dale A. Holmes, who has lived with his family in Rockdale County since 1998 and retired as Assistant Chief of the DeKalb County Police Department in 2015 after 28 years of service, stepped up to the position of Chief Deputy for the Rockdale County Sheriff’s Office in August 2017.

He began his law enforcement career with the DeKalb County Police Department in 1987 and rose through the ranks starting with street patrol to directing and leading law enforcement personnel, and eventually executive management. In 2006, Chief Deputy Holmes was promoted to Deputy Chief of the special operations division where he managed 86 sworn and 195 non-sworn personnel. Three years later he was promoted to Assistant Chief of Police (investigations, support services divisions.) in 2009 and Uniform Division Commander in 2012. Along the way, he gained valuable experience. He received the Peace Officers Standards and Training (POST) Management and Supervisory Certifications; was assigned as Commander of the narcotics section and managed personnel in the DeKalb High-Intensity Drug Trafficking Areas (HIDTA) Task Force, the Narcotics Unit, the Vice Unit, the Special Weapons and Tactics (SWAT) Team, White Collar Fraud Unit, Permits Unit, and the DeKalb Taxi Wrecker Bureau.

He has managed fiscal responsibilities to include the Narcotics Seizure &amp; Awarded Seizure Accounts, the Investigative Funds Accounts, and HIDTA Grant funding, as well as managed grants for the Aerial Support, Bomb, Commercial Vehicle, and Strategic Traffic Accident Reductions (S.T.A.R.) (DUI) Units. His command experiences also include being Assistant Commander of DeKalb County Homeland Security and Intelligence, Deputy Chief of the Special Operations Division, and Assistant Police Chief. Among his honors, Holmes was named DeKalb Police Detective of the Year and North DeKalb Rotary Club Detective of the Year in 1995.

Chief Deputy Holmes attended Tuskegee University, where he graduated in 1986 with a Bachelor of Science degree. He is also a 2007 graduate of the Federal Bureau of Investigations National Academy, and in 2010 earned a Master of Science degree in Education from Central Michigan University.