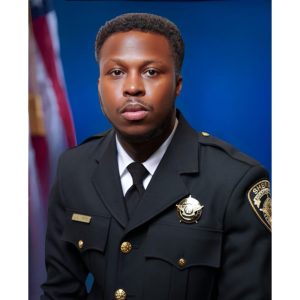 Chief of Staff LeJohn D. Tate was appointed the rank, Chief of Staff at the Rockdale County Sheriff’s Office (RCSO) February 5, 2022. Before his current rank he served as a shift sergeant in the Uniformed Patrol Division. COS Tate is a Los Angeles, California native who moved to Georgia to further his education and begin his law enforcement career 8 years ago as a Correctional Officer with the Georgia Department of Corrections. He has also worked for Dismas Charities Federal Halfway house where he was responsible for the safety and tracking of residents.

In 2017, COS Tate took the next step in his career becoming a certified peace officer. COS Tate has been employed with the RCSO for 5 years. In his time at the RCSO, COS Tate served as a Detention Deputy, Certified Deputy, Corporal over the RCSO Heat unit specializing in Driving Under the Influence, and as a shift Sergeant before his appointment to Chief of Staff. He is a Field Training Officer and General Instructor. In addition, he has a desire to reduce the likelihood of serious injury accidents due to driving under the influence. COS Tate, attended training for Impaired Driving, Advanced Roadside Impairment, and Drug Recognition, leading to him obtaining the title of Drug Recognition Expert (DRE). As a DRE he has served as an expert witness in cases related to DUI’s. He has also attended On-Scene traffic investigations. His love for traffic enforcement and accident reduction was truly displayed through the operations he introduced to the agency. He implemented a concept called “Traffic Tuesdays” to educate the motoring public on how to foster positive encounters with law enforcement during traffic stops. Through Traffic Tuesday, he has held several in person talks within the Rockdale County Public School System to teach students safety tips on driving.

COS Tate earned his bachelor’s in criminal justice from Clark Atlanta University and his master’s in business administration from Herzing University. He has also been trained and certified in Special Weapons and Tactics, Crisis Intervention, Grant Management, Emergency Management, and Executive Protection.