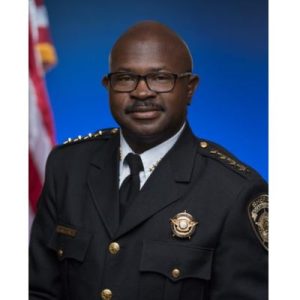 Sheriff Eric J. Levett is the elected Sheriff of Rockdale County. He served previously as a supervisor assigned to the Criminal Investigations Division of the Rockdale County Sheriff’s Office (RCSO) before assuming his current role. Levett was sworn in by Georgia Supreme Court Chief Justice Carol W. Hunstein, and he assumed office on January 1, 2013.

Sheriff Levett’s career began at the age of 14 when his passion for law enforcement blossomed and he became a member of the Rockdale County Sheriff’s Office Law Enforcement Explorer Program. He served as a volunteer Explorer from 1988 to 1992. In 1991, Sheriff Levett began working part-time in the Sheriff’s Office 9-1-1 Communications Center. In 1992, after graduating from Rockdale County High School, he was hired as a full-time dispatcher. Levett then became a certified detention deputy in the Rockdale County Jail in 1993 and a certified deputy sheriff in 1994. In Levett’s climb up the ladder to elected sheriff, he has held supervisory positions as a Corporal and Sergeant, as well as served in a variety of roles throughout his law enforcement career, including as a Community Oriented Policing Services (COPS) deputy, a School Resource Officer (SRO), a criminal investigator, and a certified Georgia peace officer.

Levett is a graduate of the Columbus State University Professional Management program and is currently pursuing a bachelor’s in criminal justice from Thomas University. Sheriff Levett is a member of the Georgia Sheriff’s Association, Sons of the American Legion, Rotary Club of Conyers, Leadership Rockdale Class of 2014, Leadership Rockdale Planning Committee, Atlanta Metropol, the Rockdale County Superintendent’s Advisory Council, Rockdale Career Academy Board of Directors, Constitutional Officers of Georgia, National Organization of Black Law Enforcement Executives (NOBLE), Choosing Healthy Activities and Methods Promoting Safety (CHAMPS) Advisory Committee, and the National Sheriff’s Association. Levett is also a board member and mentor with the Boys and Girls Club, serves on the Board of Directors for the
Rockdale Coalition for Children and Families, and is the Vice-Chairman for the Georgia Piedmont Technical College Law Enforcement Advisory Board.

When running for his third term in 2020, Sheriff Levett was determined to increase community outreach and set a goal to establish the S.M.A.R.T. (Safety and Mental Health Alternative Responses Training) initiative in Rockdale County to ensure all deputies, police, and other first responders receive the best training offered for the betterment of the community.